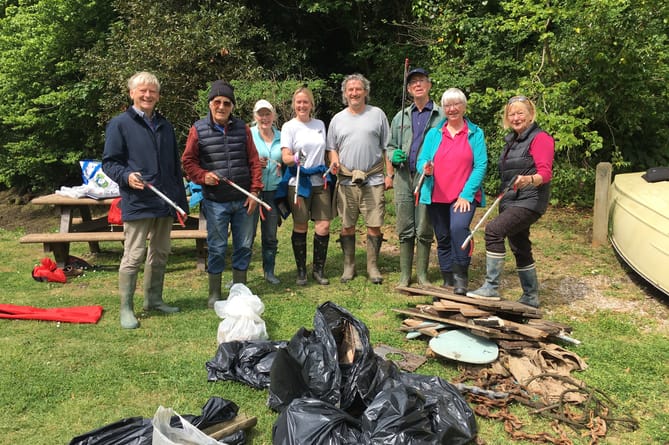 Members of the Waterhead Creek Society met last weekend to carry out a litter pick around the creek in Kingswear.

The group has been holding litter picks twice a year for the last nine years as part of the Great British Beach Clean. They said, despite some members walking the creek every day collecting rubbish, there is still plenty being washed in.

Society member Richard Coe said there has been changes to what’s been found in the rubbish as they’ve progressed with the litter picks.

He said: “Initially it was plastics of every type. Litter thrown from cars and blown into the creek, fishing tackle washed in from the Dart and bits of old building waste and boats. Gradually we’ve tackled some of the larger bits that have been there for years and now we are just seeing each season’s rubbish.”

Kingswear Parish Council supplies the litter picking kit and Dart Harbour has helped with the removal of larger items. As well as changes in the litter, the group are now noticing an intrusive newcomer.

Member Eileen Parkes said they recovered a couple of Pacific Oysters last weekend, which is concerning as these shellfish are causing considerable problems in the southwest estuaries. Eileen said: “The Pacific Oyster is much larger than the native British species. They take over the best breeding grounds. They have very sharp shells and people, boats and pets can get injured walking on them. The AONB is working to reduce the numbers and restore the balance. And before eating any of them, you have to be very sure of the water quality.”