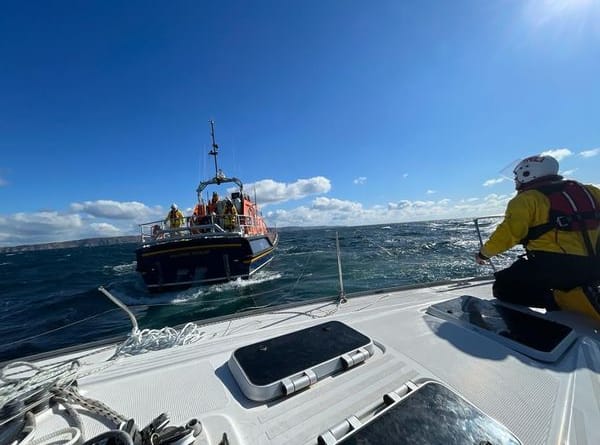 It’s been a busy time for the Salcombe Lifeboats.

Wednesday 31 March saw the Inshore Life Boat launched to assist a seven metre sailing vessel with one person on bord. It was reported to have engine problems around Salcombe Bar and was struggling to enter the harbour. While carrying out an extensive search for the boat the ILB was stood down by the Coastguard when the boat’s position was found to be just off Brixham harbour.

Thursday 1 April saw the All-weather Life Boat, The Baltic Exchange III responded to a Mayday call from a yacht which had lost its mast and was rolling badly in ‘unfriendly’ conditions. Once on scene two Lifeboat crew members went on board the yacht and were able to make the vessel safe. She was safely towed back into Salcombe.

Friday 2 April and the crew of the ALB were asked to provide medical assistance to a casualty with a suspected broken ankle, in the Soar Mill Cove area. Once there and using the onboard Y boat, the crew transferred the person to shore to assess the situation.

The casualty had a broken limb and given the difficult location of the incident the decision was made to bring the casualty back to Salcombe by lifeboat for onward transfer to hospital.