Start Bay humpback whale believed to be 'quite healthy and feeding' 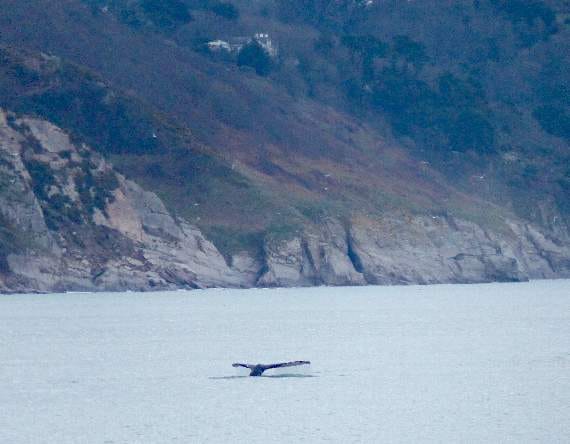 A humpback whale has paid a rare visit to the South Hams this week, spending five days in Start Bay before moving further out to sea.

Hundreds of people gathered along the coastline at Torcross to catch a glimpse of the whale, believed to be about 25 foot long. The whale was first spotted on Thursday, February 23, and at first it was reported that the cetacean was unwell and travelling with a calf.

But this week, marine experts insisted that the whale looks to be quite healthy and is feeding, possibly on mackerel or herring known to be in the area at the moment.

Stephen Marsh, operations manager from British Divers Marine Life Rescue explained that reports of the whale having a calf with it were most likely people being confused by seeing porpoises and dolphins feeding in the vicinity - no calf has been confirmed as being in the area.

Census 2021: How do official population figures compare to estimates?

Census 2021: South Hams has among the most pensioners in England and Wales

Pete Moore, from Forest and Beach at Beeson, who went whale-watching at Torcross, said: “The visiting whale was an amazing experience for everyone who came down to see it. It was like an episode of Blue Planet with porpoises, seals, gannets and seagulls feeding alongside the humpback whale.

“The children loved it, my 14-year-old son, Sam said last week he was on Dartmoor in a snowstorm for Ten Tors training and this week he was whale-watching on the beach!

“These memories will stay with him forever. Lots of local children came down after school to see the spectacle, they could be inspired to be the future conservationists, environmentalists or marine biologists.

“What was great was the atmosphere on the beach, lots of locals and visitors coming together and chatting all with one aim of spotting this magnificent creature. “Everyone was really respectful and and reports of ’dozens of people crowding on to boats’ was absolutely incorrect. There was the odd fishing boat carrying on with its business.

Pete continued: “We will definitely be taking advantage of this visiting whale when teaching children about the marine environment and Start Bay. We will be printing our photos of the whale for visitors to Forest and Beach to view and we will be teaching the children about the bio-diversity we were witnessing right in front of us.”

Contrary to some statements appearing in the press, it is not unusual for humpback whales to enter shallow coastal waters to feed on shoaling fish. According to the BDMLR, they are currently monitoring more than half a dozen humpback whales around UK coasts.

A big concern to marine experts though is human activity around the whales, as any boating traffic could frighten a whale into making a mistake and beaching, or swimming into areas where it could become entangled in fishing gear such as creel pot lines. But as long as the public remain on land and do not attempt to approach the whale in boats, jet-skis or other vessels, it should be fine and move off in its own time.

Members of the public are reminded that harassment of whales can result in a £5,000 fine or even a prison sentence through the Wildlife and Countryside Act 1981.

In recent years, there has been an increase in sightings around the UK. Most of these have been in Scotland where they would be expected, but humpbacks have also been recently spotted off the coasts of Cornwall, Devon, Kent, Suffolk, Norfolk, Yorkshire, Northumberland and the north west.

This may be due to a good supply of prey, but also may indicate a recovery of the population since the whaling moratorium in the 1980s, with animals returning to feeding haunts of old.

Reports of the Start Bay humpback show that it is swimming strongly and making the most of a glut of food. It is hoped that the history of this individual may be discovered, if photos of the underside of its tail can be compared with a worldwide catalogue - a whale’s tail markings are as distinctive as fingerprints.

Stephen Marsh, BDMLR operations manager said: "We would ask members of the public to stay away from this beautiful animal to allow it to feed naturally and not be shocked into stranding.

"Disturbing a whale, dolphin or porpoise is illegal in the UK and so authorities have been recording any human activity surrounding this whale and will be looking for infringements of the law. It’s quite possible to see the whale from the shore and therefore there is no need to enter the water to approach it."

BDMLR has specialist teams that have been trained to rescue whales that may become entangled in fishing gear at sea. The charity is monitoring the whale and is in touch with other organisations in case there is a problem, but in most cases humpbacks will return to deeper water quite safely once they have fed sufficiently.

Reports of the whale’s whereabouts on Tuesday suggest that it is already moving southwards.

Professor Chris Parsons, from George Mason University in the United States of America, suggested the humpback may return to Start Bay in the future: “Whales often return to good feeding areas. If this current whale is getting a slap up meal in Devon waters, there is a chance that they will keep coming back and be a regular.

“Like visiting tourists to Kingsbridge, if they have a good time, they may come back every summer. So people should be careful not to disturb it.

“Boats should keep at a respectful distance - about 100 metres - and operate at a slow - no wake - speed.

“The noise from boats can disturb whales in addition to the risk of collision, or even human injury – humpback whales leap and slap their tails/fins on the water and you do not want to be in a small boat underneath that.

“Whale-watchers have been injured by humpback whales over the years when they rammed boats or hit tourists. Under no circumstances try to swim with the whale!”Watch a compilation of videos taken of the humpback whale below, courtesy of John Walker, Video Tech Media.