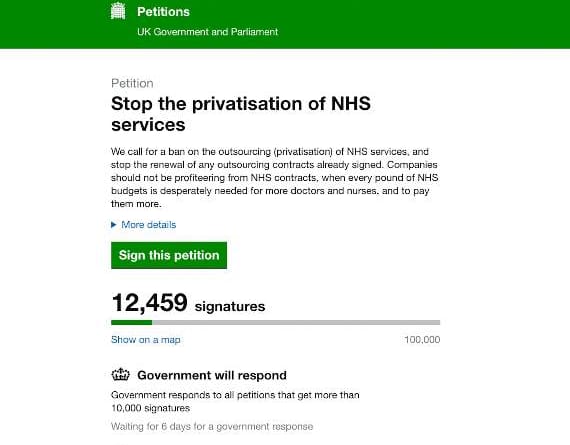 A man from the South Hams created a petition that became one of the most popular on the Government website.

Jamie Snape created a petition called ‘Stop the privatisation of NHS services’ and so far has attracted more than 12,400 signatures, passing the 10,000 needed to trigger a response from the Government.

The petition was, for a short while, the second most popular petition on the website, and leads with Jamie, from Kingsbridge, saying: “We call for a ban on the outsourcing (privatisation) of NHS services, and stop the renewal of any outsourcing contracts already signed.

“Companies should not be profiteering from NHS contracts, when every pound of NHS budgets is desperately needed for more doctors and nurses, and to pay them more.

Census 2021: How do official population figures compare to estimates?

“Research by Bain & Company published by the Financial Times in January 2017, found that private-sector companies had been invited to bid for 14 per cent more NHS contracts in the 12 months to August 2016 than just a year previously.

“In March 2017 the Financial Times also reported of the extra £2bn given to the NHS in 2014 to try and bolster NHS services, according to data analysis carried out by the Health Foundation, an independent charity, only about half this extra money was spent in the NHS.”

Jamie said: “The NHS looked after my dad who was ill for seven years before he passed away, when we lost a baby the NHS staff in Plymouth were amazing and the consultant followed up into our next pregnancy, which was above and beyond what they had to do. They have looked after my family so well.”

You can find Jamie’s petition at: petition.parliament.uk/petitions/205106. The Government has not yet responded to it.