Man cycles to thank the RNLI in Salcombe

A young man who was rescued by RNLI lifeboat crews from Salcombe has so far raided over a thousand pounds by cycling with a group of friends 150 miles from Bristol to Salcombe. 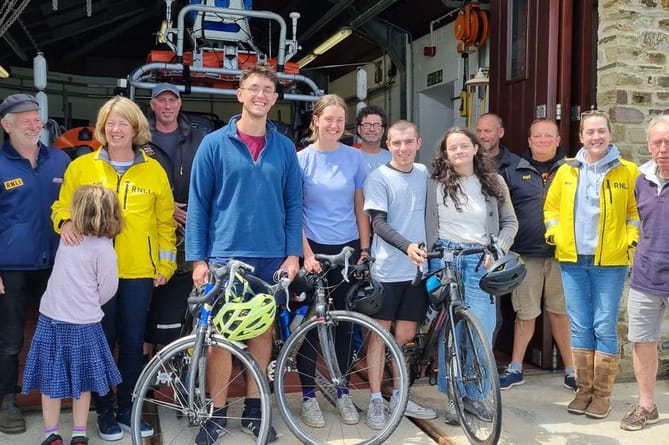 George Pearce, a young man who sustained serious leg injuries last year during a visit to Salcombe, returned to say thank you to the Salcombe RNLI Lifeboat crews who helped and supported him through what was a harrowing experience.

George said: “On June 20 2021, I had an accident whilst scrambling around the coast near Salcombe where I pulled a rock onto my legs as I fell into the sea. The rock severed the muscle in my right thigh and chipped the bone whilst doing some serious ligament damage to my left knee. The accident led to a free boat and helicopter ride as well as a good few months of being pushed around in a wheelchair.

After four surgeries and lots of physio, I finally got on a bike again in February, a huge step in my recovery. A year on from the incident I’d like to celebrate my recovery and raise some money for the RNLI who helped me massively on the day.”

At the time there was considerable concern as to how his injuries would affect his future mobility, however, following multiple operations and hospital visits George and his friends cycled 150 miles from Bristol to Salcombe to say thank you to the crew and in doing so also raise funds for RNLI Salcombe.

Several of the crew involved in the incident that day, were on hand to greet George and his support team. After a chat in the crew room and the obligatory cup of tea, necessary at any lifeboat station. George thanked Coxswain Chris Winzar and his team, with a special note of thanks going to Esther McLarty (Lifeboat Medical Adviser), Richard Clayton, and Jeff Gillard.