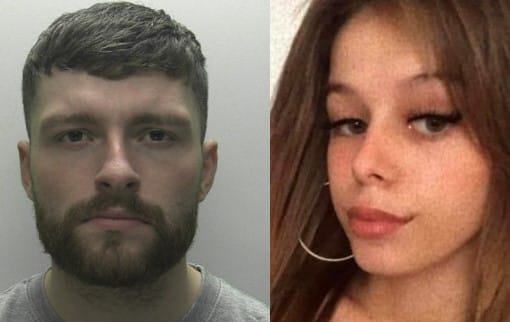 A Plymouth man has been jailed for life after brutally murdering an 18-year-old woman in a sadistic and prolonged attack, committed to satisfy his morbid fascination with serial killers. He must serve a minimum term of 30 years and 190 days.

Cody Ackland, 24, struck Bobbi-Anne McLeod on the head with a claw hammer at a bus stop in Leigham, Plymouth, on the night of Saturday November 20 last year.

He abducted her into his car and drove to Bellever Forest car park on Dartmoor where he repeatedly attacked and then murdered the teenager.

Ackland then went to Bovisand in the South Hams, stripped Bobbi-Anne and dumped her body in undergrowth. He later threw away her clothes in an allotment before going out to party with friends.

Three days later he turned himself in to police and confessed to the murder, telling detectives where he had disposed of Bobbi-Anne’s body.

Ackland, from Southway, pleaded guilty to murder at Plymouth Crown Court on April 5 and was sentenced today, May 19.

The court heard that Ackland was leading a double life and had a secret - a morbid interest in a significant number of serial killers from around the world, particularly US killer Ted Bundy whose kidnap and murder of young women bore similarities to Ackland’s crime. There were pictures of Bundy and the weapons he used on his phone.

In the days and weeks leading up to Bobbi-Anne’s death, Ackland searched the internet for information about serial killers’ crimes, their aftermath and the bodies left behind. He kept a huge supply of grisly images on his phone, depicting dismembered or dead bodies, post-mortems and murder scenes.

Over the days and hours before the murder Ackland browsed for remote locations on Dartmoor and for potential weapons.

The court heard that Saturday November 20 was a normal family day for Bobbi-Anne. She left her Leighham home around 5.45pm to see her boyfriend.

She told her father she loved him and headed to the nearby bus stop on Bampton Road. Bobbi-Anne was seen there between 6.05pm and 6.15pm, looking up the street, checking for the bus.

But Ackland was out in his car and about to pass through Leigham. Phone data put him in the same location as Bobbi-Anne around 6.55pm.

By 7.15pm her family had not heard from her and they were starting to worry.

Meanwhile, a local man stumbled across Bobbi-Anne’s mobile phone and her AirPods case at the bus stop; he gave them to the bus driver who arrived at 7.23pm but they both assumed someone had lost them.

At 9pm Bobbi-Anne’s boyfriend phoned the family home asking if she was still there. Her family called friends and went out looking for her. Concern began to spread on social media and the next day members of the community joined the search.

A local schoolboy, who had seen Bobbi-Anne waiting for the bus the night before, found her AirPods on a path behind the bus stop on Sunday morning.

On Tuesday November 23, Ackland left work at a valeting department of a Plymouth garage around noon and never returned.

At 1.30pm he walked into Charles Cross police station in Plymouth saying he had information about the Leigham disappearance.

Ackland was arrested on suspicion of murder. He asked for a map and directed officers to Bovisand, saying Bobbi-Anne could be found in the lane that led to the beach cafe. All focus turned to finding Bobbi-Anne in the hope that she was still alive.

Around 3.45pm detectives found her body within vegetation around 15ft down a steep incline halfway down the densely wooded lane. She had died from multiple injuries to her head and face inflicted during a prolonged and frenzied attack.

In disturbing police interviews Ackland revealed the horrific circumstances about the night of the murder for which he said he was ‘solely responsible’. He confessed, he claimed, to help the police and Bobbi-Anne’s family.

According to his account, the initial attack at the bus stop ‘was meant to be it’ and he went back to his Ford Fiesta. However, Ackland then went back to the victim and kidnapped her into his car before driving approximately 19 miles to Bellever Forest car park, arriving around 7.45pm.

It was here he attacked her repeatedly with the hammer outside the car before burning her handbag nearby along with other items from the vehicle.

Ackland then put Bobbi-Anne into his car boot and drove to Bovisand in the South Hams, pulling into a layby on the remote lane around 9.15pm, before putting her body in undergrowth. He then went home to bed.

The next day he drove to Tamerton Foliot, threw the hammer into the River Tamar and a carrier bag containing his and her blood-stained clothing into nearby allotments in Coombe Lane. The hammer was never recovered despite a thorough police search.

Ackland then went for pizza with a friend, attended practice with bandmates in his rock band, got a takeaway and drank into the early hours of the next day with friends at a pub lock-in. Friends recall him being ‘happier than usual’. Ackland went to the cinema the day after.

In interview he told the police that the killing was not on his mind because it was ‘so out there’ and extreme that it was almost like a film or fantasy, something that hadn’t really happened.

He admitted that he did not know how he felt about the murder, that it felt like someone else had committed the crime but he knew deep down it was him.

Crime scene investigators located the bag of clothes in the allotments. Ackland’s blood-stained trainers were also found in his wardrobe. Bobbi-Anne’s blood was found in and around the car.

Murder on his mind

Investigators uncovered 3, 216 images on Ackland’s phone, many of a disturbing and dark nature and reminiscent of horror films.

Senior Crown Advocate Richard Posner told the court that Ackland’s interests were ‘sinister and relevant to his motivation’, saying: “His interest in the macabre presents as deep-rooted; a fascination with death, murder and murderers and the means to commit murder.”

He had viewed and kept extreme and graphic images of dead and dismembered people, bodies of purported murder victims, post-mortems, deposition sites and artefacts linked to murders such as weapons or soiled and tainted items. Ackland possessed images linked to serial killers and historic missing persons appeals by US police.

Added Mr Posner: “There are numerous images of the American serial killer Ted Bundy in his telephone and images of weapons he used to kill his victims. Bundy approached his victims in public places and knocked them unconscious before killing them. It is not a coincidence that Bobbi-Anne McLeod met her fate the same way.”

On sentencing, His Honour Judge Robert Linford told Ackland that his act was ‘determined savagery’ saying that he was satisfied from the evidence that he intended to kill.

“This was a prolonged and awful ordeal for this poor person. She had the whole of her life in front of her until it was brutally and savagely snuffed out by you,” he said.

“You were quite clearly planning murder and you did murder.”

Following today’s sentencing Bobbi-Anne’s family paid tribute to her, saying that she was ‘beautiful from the day she was born’ and spoke of her dreams for her life ahead. Bobbi-Anne wanted to become an interior designer.

They said: “Bobbi was a beautiful girl who lit up our lives and the lives of everyone she ever met. She was kind, funny, and loyal. She was the best daughter, the best sister, and the best friend to so many people. Everybody who knew Bobbi loved her. We have been robbed of our beautiful girl in the worst possible way and our lives will never be the same without her.

“I want Cody Ackland to know that he has taken away our world. We will never see her beautiful face or hear her laugh, see her get married or have the children she so wanted. So many everyday things have been taken away. Her not being here is still unimaginable.

“Our lives have changed forever. We have not been able to say goodbye to Bobbi-Anne and we can only imagine the things he did to her – the thoughts are continually going around in our minds. Why Bobbi-Anne? Why make her suffer? To know her final hours were spent being tortured destroys us inside.

“Bobbi-Anne was so loved and had so many life plans; he cruelly ripped that life away from her and us. We can’t even contemplate a future without her in it. There will never be anything the justice system can impose that will ever come close to what he deserves.

“We do want to say thank you to everyone. There is no piece of paper, bulletin board, flyer, or anything big enough out there on which we can say thank you.

“The help and support from everyone, not just friends and family but everyone, everywhere, who helped with all of the posters, posts and messages to bring our baby, our Bobbi, home – thank you.

“To everyone in the police, the investigation team and all of the services, we thank you for everything you have done and for finally getting justice for Bobbi-Anne.”

She said: “This was a shocking and brutal crime which led to a young life being tragically cut short and changed the lives of Bobbi’s family forever. The details of the case heard today were harrowing, particularly for Bobbi’s family.

“I would like to thank the investigators who worked on this case, including the detectives, uniformed officers, forensic investigators and all of the support teams who conducted themselves professionally and sensitively in a case of such distressing nature.

“I would like to commend Bobbi-Anne’s family – Donna, Adrian and Lee - for the strength, courage and resilience they have demonstrated throughout the investigation process and in particular, today’s hearing.

“The senseless and evil acts of one man have devastated their lives and I hope that today’s outcome brings them a sense of justice.

“The impact of this case has been felt far and wide across the communities of Plymouth, particularly in Leigham. It has been heartening to see the community come together in support of Bobbi’s family. I hope the community can now focus on healing and recovery, knowing that Ackland will be in prison for a substantial length of time.”

Ian Wilkinson, Senior Crown Prosecutor for CPS South West, said: “Bobbi-Anne was just 18-years-old when her life was taken away in the most cruel and shocking manner.

“As this case reaches its end our thoughts are very much with Bobbi-Anne’s family as they continue to live with what Cody Ackland did.

“The CPS was involved with the case from the start of the investigation following the discovery of Bobbi-Anne’s body. We worked closely alongside our partners in the police to build the strongest possible case to ensure that Ackland was held responsible for what he did.

“Violence against women and girls has a devastating effect on victims and their families. The CPS is dedicated to working with our partners in the criminal justice system to bring offenders to justice and make the public safer.”

If you’ve been affected by anything in this news article, support is available. Please contact the police by email: [email protected] or telephone 101.

Alternatively, advice and support are also offered by our partner agencies: