Duo row into the record books 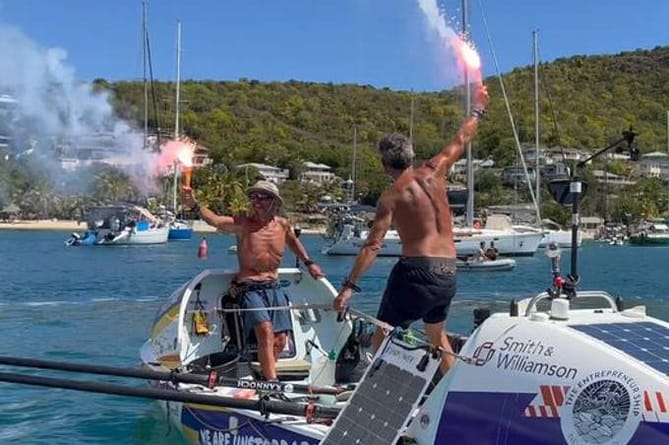 The rowing duo with strong South Hams connections have crossed the finishing line in Antigua completing the three thousand mile Talisker Whisky Atlantic Challenge and making it into the record books as the oldest pair to row across any ocean.

Guy has a home in Salcombe while David lives in Kingsbridge.

The duo crossed the finishing line in Antigua on Thursday February 3 after a feat lasting 53 days 3 hours and 42 minutes to the sound of air horns, whistles and cheering from loved ones and well wishers around English Harbour. There then followed a round of media interviews and greeting the crowd.

David said: “Everything has been amazing and I have really embraced the solitude and the night skies, being able to get away from everyday life and really reset. I have learned a lot about myself. When you are tired mentally and physically you go to some extraordinary places.”

He added that he’s pleased “the funds we have raised (are) being used to help social entrepreneurs who typically find int difficult to fund their enterprises.”

They have been raising money for UnLtd which supports social entrepreneurs and as of February 7 their Crowdfunder total stood at almost £347,703.

Shortly after arriving they headed to a restaurant where they sat on cusioned chairs (for obvious reasons) that didn’t move around and tucked into a burger and chips with fresh salad and a cold beer.

Arrival in Antigua wasn’t the end of the story, the following day came the boat clean up and post-race inspection.

The checks include many things to make sure no unfair advantage was gained and also that no rubbish was dumped at sea. Empty food packes were checked to make sure they correspond to the amount of full ones taken on the boat at the start. The team passed the inspections.

Then the boat clean up, a smelly but necessary job before it is shipped back to the UK.

Then time for a few days decompression in the beautiful Carribean surroundings before heading for home.